What High-Speed Desert Truck Racing Teaches Me About Risk 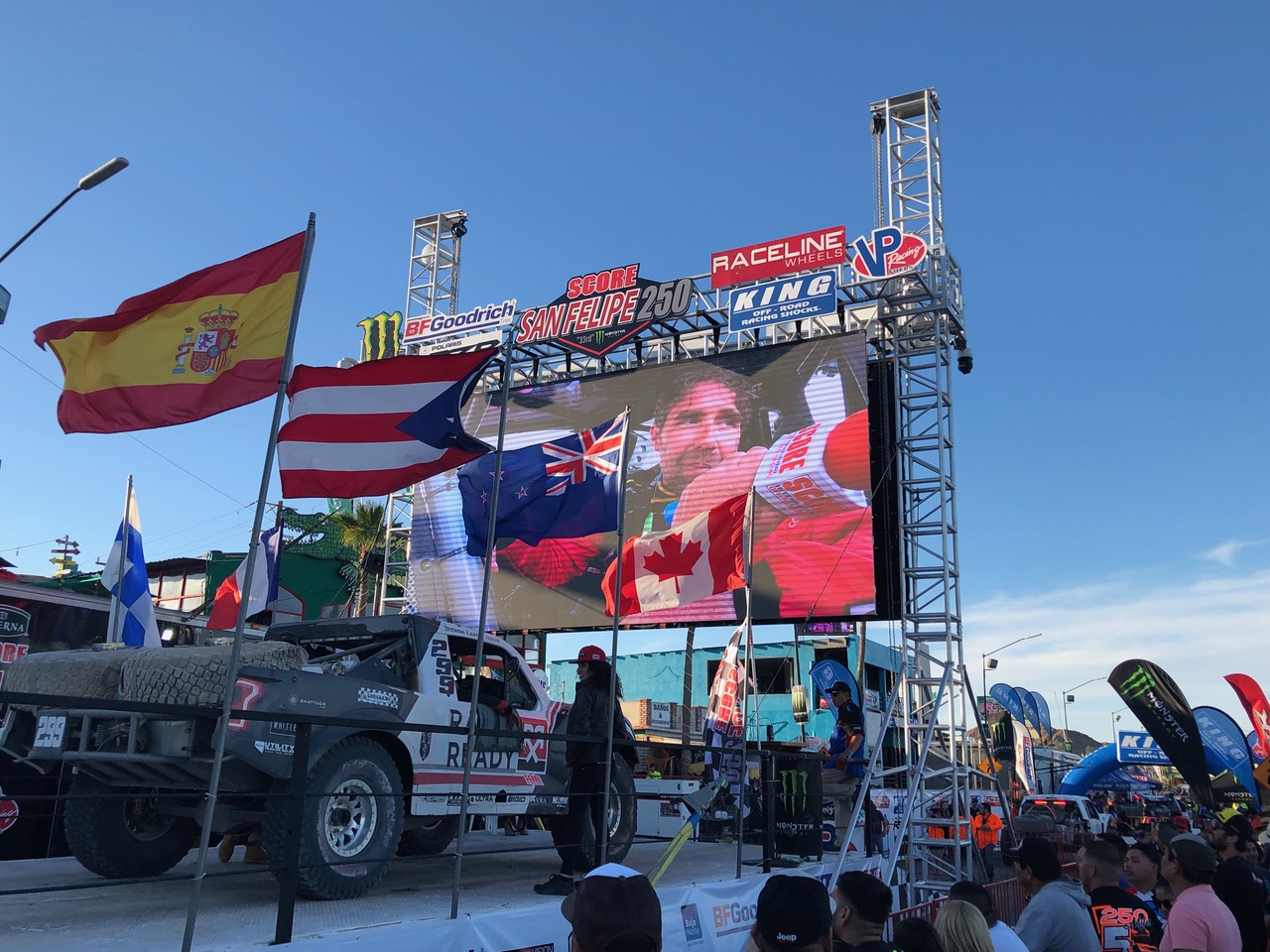 In this column, Charles Dorrance, shares his thoughts about assuming and avoiding risk. Dorrance is a high-speed desert truck racer and owner of 3 Bears Racing.

I like to go fast. That's how I can win races. But the faster I go, the more risk I take on. At a certain point, excess risk is counterproductive and decreases my odds of winning. Finding that risk point, and not exceeding it, is what wins.

Our first race, the San Felipe 250, was in early April. The course is one of the most rugged in the world. This year's course ran 350 miles. For me, it was more than 7 hours in the truck, bouncing over rough tracks, giant rocks, and soft sand washes that can grab tires and get you stuck in an instant.

Racing my 500hp truck around the course as fast as I can, sometimes blasting along at more than 105mph, the risks are very real. Non-theoretical. I could crash in a remote area, far from medical help. Sometimes course visibility is near zero as dust clouds hug the ground when hundreds of vehicles pass, so colliding with another racer is possible. Spectators are always at risk. Last year, two people were killed watching the race.

Racing my 500hp truck around the course as fast as I can, sometimes blasting along at more than 105mph, the risks are very real. Non-theoretical. I could crash in a remote area, far from medical help. Sometimes course visibility is near zero as dust clouds hug the ground when hundreds of vehicles pass, so colliding with another racer is possible. Spectators are always at risk. Last year, two people were killed watching the race.

I'm constantly concerned about my crew. I have two chase teams that drive fuel trucks onto the course to create pop-up pitstops for me.  If they're delayed, or break down, I won't have fuel. My race is over.

It takes 75 gallons of fuel to fill my tank, and our pressure systems pump it at 120 gallons per minute. The volume and pressure create a fire risk, so the crews wear full fire suits, aprons, and helmets when handling the gas.

Some of the crew work for me year-round, and some are volunteers. All are handy with engines and vehicles. They can access any part of the course with parts and tools to handle major repairs like a broken drive shaft.

Much of what we do to reduce risk happens before the race begins. We put the truck through extensive preparations before each race. It takes two mechanics more than a month to prep the vehicle. They inspect, maintain, and sometimes replace the transmission, motor, shocks, electronics, safety equipment, and other gear.  It's not all done by my people. They send out the most complex jobs to subcontractors. We try to use the best people we know — the best people we can get. I have a friend who says that "if you use the best people, you're never disappointed." That's a management lesson I always keep in mind. Every time I've tried to shortcut it, it hasn't worked out.

"Pre-running" is the other way I reduce risk. My team and I arrive at a race at least a week early. We spend each day scouting the course. We use two-seater utility vehicles for this. We don't use the race truck because we don't want to break it. The rule of thumb is to see each section of the course at least twice before race day. The courses are different each year, so every race has to be pre-run. The first time we run it, we're mostly marking dangers — sharp turns, rocks, soft sand. It's my co-driver's job to mark all of these hazards and load them into our GPS systems.

The second time we run a section, we look for performance improvements: different lines, shortcuts, areas where we can pass other trucks during the race. That's why we do the second pre-run. Every time we can see a section before the race, it makes it that much better.

Much of the preparation for a race happens inside my head, with race strategy. We run a four-race season, with points for each race, so it's important to finish each one. Lots of people don't. In San Felipe, a third of the racers who started in my class didn't finish. So, they're out of the season's points race already.

I'm always thinking about how fast I can go, without losing control or pushing the truck too hard. That's always the big question. Sometimes it's better to take some risk off the table and slow down. In this race I didn't push as hard as I could have. It was a calculated risk and it paid off. I finished fourth, just off the podium. You might think if I ran a little harder I might have been on the podium. You might be right. But I could have been broken down by the side of the road.

In one of my last races, I blew up my engine. Typically, when that happens, one of the pistons melts. It creates a catastrophic engine failure. Smoke starts pouring out, the truck stops, and your day is over.

On the Baja 1000, the course is too long for me to drive alone. So, I recruit two other drivers to share the driving time. Each of them has a co-driver/navigator, so the teams of two trade out at pit stops. I try to select other drivers that will follow my race program. The best way to minimize mistakes is to slow down, just a little. That's hard for a lot of people to do. Their mindset is that it's a race, and they have to go as fast as they can. In reality, there's a cost to that.

Race day is when the preparation and strategy collide with reality.

Everyone's excited. The trucks go out one at a time, in 30-second intervals. I'm thinking about the trucks that are already on the course. My motor is running and it wants to get going. It doesn't like to idle, and shakes the truck, along with me and my co-driver. My crew surrounds me, and they're all fired up. They love racing and they want me to do well. Seconds before my start time, I drive up a giant ramp and give a short interview, which is broadcast to the crowd. I can see myself on the big video screens. The interviewer asks: "Are you excited? Are you pumped?" I can hear engines revving behind me. The seconds tick by and the green start lights come on. I'm flooded with adrenaline and just want to drive as fast as I possibly can.

I try to stay calm. I consciously take breaths. I don't want that adrenaline. I'm trying to breathe in and breathe out and relax. This is a long race.

In San Felipe, I saw a lot of people who didn't make it 20 miles into the race: wrecked, stuck, running too hard, broken. I've been there. It's like a walk of shame, except everyone else is moving and you're not. A humbling moment.

A couple drivers passed me early on. They were going fast, really fast, trying to get up to the front. Lo and behold, I finished ahead of them.

There's a mental trick I use. Even though I'm in touch with my crew by radio, and they can meet me anywhere on the course and fix just about anything, I pretend I don't have a crew. I pretend there are no spare tires, no spare parts, no cavalry to ride to the rescue if I break down. I pretend I only have what I've got now, and I have to take care of it.

There's a mental trick I use. Even though I'm in touch with my crew by radio, and they can meet me anywhere on the course and fix just about anything, I pretend I don't have a crew. I pretend there are no spare tires, no spare parts, no cavalry to ride to the rescue if I break down. I pretend I only have what I've got now, and I have to take care of it.

Once the adrenaline wears off and we're four hours into it and we have another three hours to go, I'm thinking about fatigue and how to fight it. I'm thinking about this long before it happens. I'm taking on lots of water and shoving food into me when there's time. Those are the biggest things you can do to combat tiredness besides getting out of the vehicle and putting somebody fresh in.

I'd like to have a very good season. We've started off with the right medicine to get that way. The next step is to finish each race. It's a marathon, not a sprint. If we can finish races and keep it fun, that's where it ends up being successful.